Posted on 23 November 2015 by Daniele Pontiroli 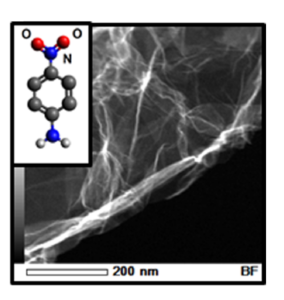 The possibility of producing magnetic graphene nanostructures by functionalization with aromatic radicals has been investigated. Functionalization of graphene basal plane was performed with three types of anilines: 4-bromoaniline, 4-nitroaniline and 4-chloroaniline. The samples were examined by composition analysis with energy-dispersive X-ray spectroscopy and magnetic measurements by SQUID magnetometry and electron paramagnetic resonance. Initial graphene was produced by thermal exfoliation. Both pristine and functionalized samples demonstrate strong paramagnetic contribution at low temperatures, which originates from intrinsic defects. Attachment of an organic molecule with the formation of a covalent bond with carbon atom on the basal plane generates a delocalized spin in the graphene π–electron system. Nitroaniline proved to be the most suitable and sufficiently reactive to attach  to the basal plane carbon atoms in large amounts. Functionalization of graphene with nitroaniline resulted in appearance both ferromagnetic and antiferromagnetic features with a clear antiferromagnetic transition near 120K.

This entry was posted in Graphene. Bookmark the permalink.