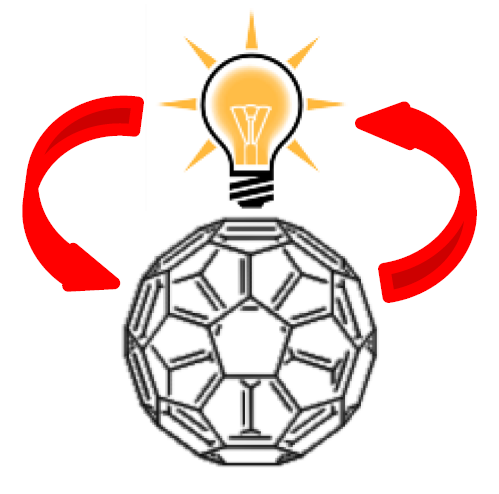 The research activity at the Energy-Storage Lab, joined to the Carbon Nanostructures Lab (CNL) at the University of Parma, is focused on the development of innovative technologies for the energy transport, conversion and storage, exploiting novel carbon nanostructures, such as fullerenes, graphene related materials and activated bio-chars.

The carbon nanomaterials, which are synthesized and functionalized at the CNL, at the Energy-Storage Lab become components for prototypes of innovative ionic batteries and/or supercapacitors, that are tested to simulate their real use. In this way it is  possible to extract important parameters, such as capacity, energy and power density, rate-reliability and life-cycle.

The Energy-Storage Lab has: a home-made Argon-glove box for handling oxygen and moisture sensitive reagents; the equipment for the research battery assembly (coin-cell type CR-2032);  the instrumentation for electrochemical characterization of the devices.

Specifically, it is equipped with a Keythley 2400 SourceMeter multimeter for two/three electrodes cyclic-voltammetric measurements (CV), a HP 4092A impedance meter for AC measurements, a Keythley current generator 6221 coupled to a Keythley 2182A nanovoltmeter for voltage-current measurements in DC mode as a function of temperature (in the range 10K-300K) and a battery/supercapacitor tester for galvanostatic measurements Lanhe-Land 2001A.

What is a Li-Ion battery?

A battery is a device which transforms chemical energy in electric energy, which can be used to power supply electrical devices, such as laptops, smartphone and electric cars. Nowadays, the state-of-the-art among batteries is represented by Li-Ion accumulators, which can be charged/discharged many times and which are able to provide the highest energy and power densities.
In a Li-Ion battery, Li ions move from the negative electrode (anode) to the positive electrode (cathode) during discharge and back when charging (see the figure below). Usually, electrodes are intercalated lithium compounds, for safety reasons; in particular, the cathode is made of lithium/transition metal (i.e. Co, Mn, Ni…) oxides, while the anode is made of carbon, in form of graphite. 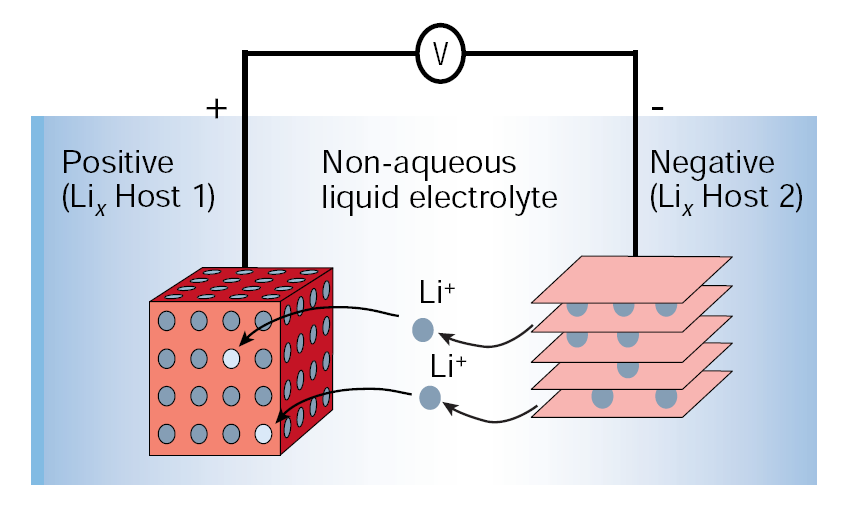 It is worth noting that Li-Ion batteries specific energy (energy per unit of mass or volume) is much lower than common fuels, such as gasoline. Moreover, the scarcity of lithium in nature could pose some limits when the Li-Ion technology will be extended on the large scale, such as in electric cars or in the so-called “smart-grids”, for the distribution of energy produced by renewable sources.
However, the development of novel strategies for the electrochemical energy storage exploiting the carbon nanostructures, such as in Li-air batteries or in Li-S batteries, or in novel devices exploiting alternatives to lithium, such as the new Na-ion batteries, is strongly promising for closing the existing gap between batteries and fossil fuels.

What is a supercapacitor?

Supercapacitors, are very promising electrochemical devices that pose between conventional capacitors and rechargeable batteries. Supercapacitors store electrostatic energy by exploiting the charge separation at the interfaces between two porous carbon electrodes and a dielectric (see the figure below). 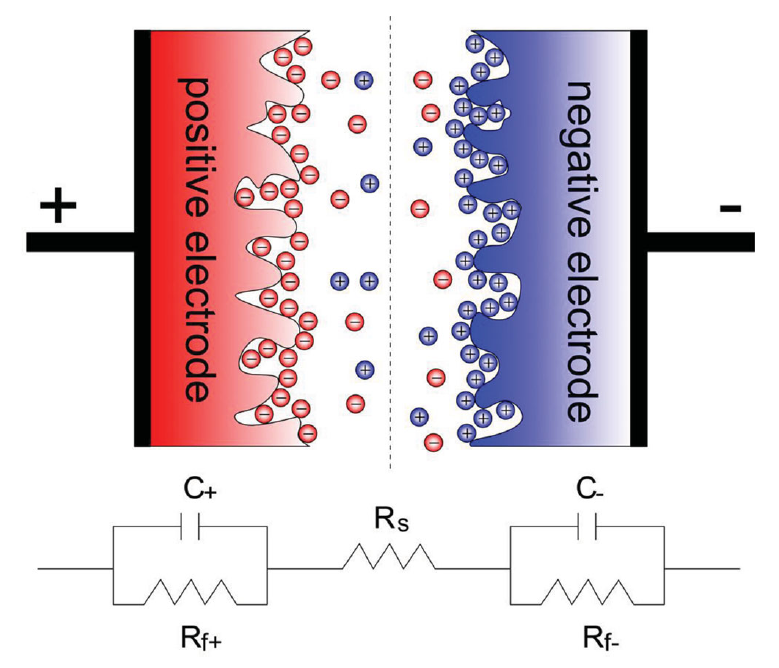 The short distance between the charge layers  (few angstroms) and the very high specific surface area (SSA) of electrodes determine much higher capacitance values than those of conventional capacitors, of the order of 10-100 F/g.  If compared with rechargeable batteries, supercapacitors show faster charge and discharge rate (higher power density), higher lifetime and lower costs, although their energy density is still much lower than that of Li-Ion batteries.

In order to achieve high performance SC, the combination  between high SSA with an optimal pore-size distribution of the carbon electrode, suiting the electrolyte ions dimension. is required. Another phenomenon which can boost the supercapacitor performances is the so-called “pseudo-capacity”, namely the possibility to induce faradic (redox) surface reactions on the electrodes, which in that case behave as ultra-thin batteries.

Here in the following you can find some topics of our current research at the Energy-Storage Lab: