Posted on 3 September 2020 by Daniele Pontiroli 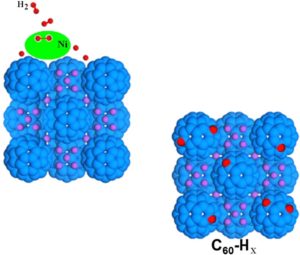 The addition of transition metals to alkali intercalated fullerides proved to enhance their already good hydrogen absorption properties. Herein we present a study based on two different synthetic strategies, allowing the addition of nickel as aggregates with different size to the lithium fulleride Li6C60: the former is based on the metathesis of nickel chloride, while the latter on the thermal decomposition of nickel carbonyl clusters. The hydrogen-storage properties of the obtained materials have been investigated with manometric and calorimetric measurements, which indicated a clear enhancement of the final absorption value and kinetics with respect to pristine Li6C60, as a consequence of nickel surface catalytic activity towards hydrogen molecules dissociation. We found up to 10 % increase of the total H2 weight % absorbed (5.5 wt% H2) in presence of Ni aggregates. Furthermore, the control of the transition metal particles size distribution allowed reducing the hydrogen desorption enthalpy of the systems.

Posted on 29 September 2019 by Daniele Pontiroli 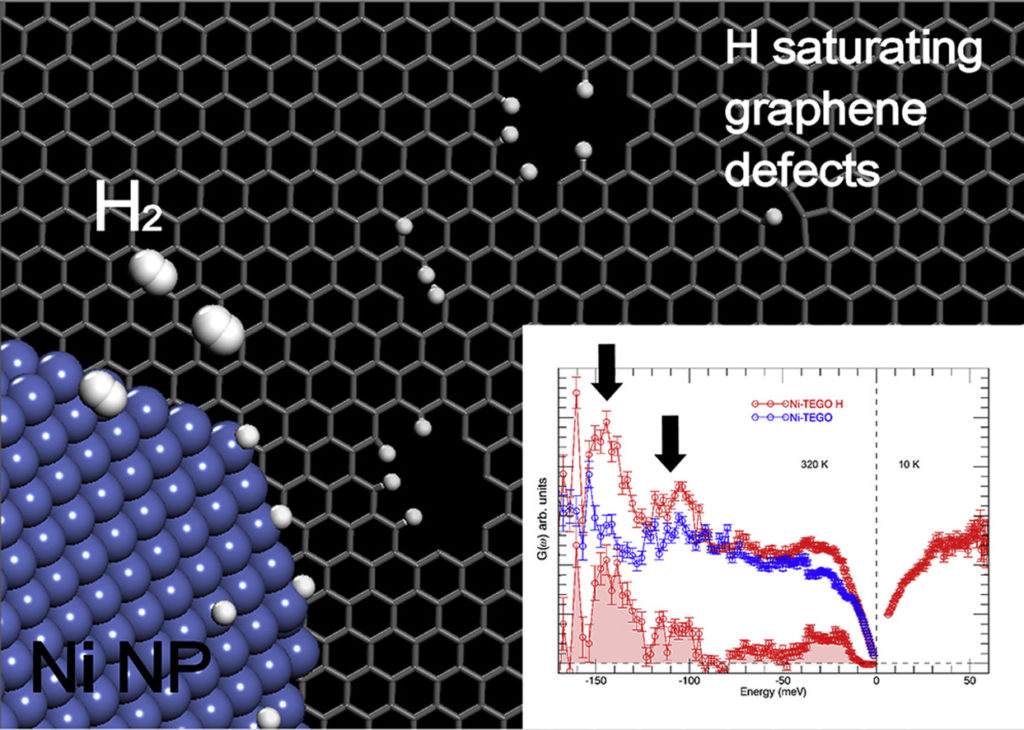 Surface decoration of graphene-based nanostructures with metals has been predicted to be an efficient way towards the development of resistant catalysts and novel materials for energy applications, such as hydrogen production and storage. We report on an extensive neutron scattering study of a defective graphene-based material decorated with nickel nanoparticles, obtained via the chemical decoration of thermally exfoliated graphite oxide. The combination of neutron diffraction and inelastic neutron scattering measurements has been used to characterize the low-dimensional carbon backbone and the presence of the nickel nanoparticles, organized at the nanometer scale on the graphene plane. The structural features of this system, along with the nickel capability of dissociating the hydrogen molecule upon hydrogen treatment, are herein discussed.

Posted on 10 September 2019 by Daniele Pontiroli 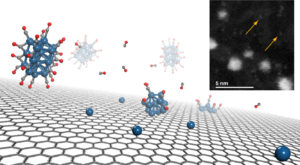 Having single atoms or small clusters docked onto a single layer graphene represents a charming feature for energy-storage and catalysis. Unfortunately, the large cohesion energy of transition metals often prevents the isolation of nanoscopic clusters, which invariably tend to aggregate. The decoration of defective graphene layers with single Pt atoms and sub-nanometric clusters is herein achieved by exploiting metal carbonyl clusters, as precursor, and investigated by means of transmission electron microscopy and X-ray photoemission spectroscopy. Unexpectedly, the process of aggregation of Pt into larger clusters is inhibited onto the surface of defective graphene, where the Pt-clusters are found to fragment even into single metal atoms.

Degassing and phase transitions with temperature in melanophlogite 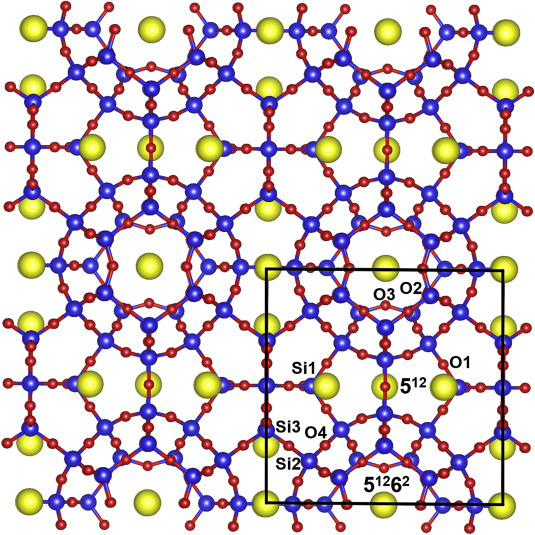 Melanophlogite (type I clathrate) has a microporous framework of corner sharing SiO4 tetrahedra, which can host guest gases. Here, a multi–analytical approach has been employed to understand the phase transitions with temperature and the degassing behaviour of a melanophlogite sample, which contains CO2 together with minor CH4 amount as enclathrated molecules.Synchrotron powder diffraction data collected between 110 and 380 K (ESRF, ID22 beamline) show a clear splitting of the major peaks up to about 360 K. Le Bail analysis shows that the low temperature phase is monoclinic, changing to cubic at ∼370 K. Landau theory analysis indicates that the transition is second order, with Tc = 369(1) K. Moreover, significant volume strain related to the phase transitions accounts for the lower thermal expansion at higher temperature. Differential scanning calorimetry shows evidence of a further phase transition between 220 and 250 K. The transition is confirmed by powder diffraction, with a change in slope in the b unit cell parameter and in volume expansion in the same temperature range. High temperature X-Ray powder diffraction between 313 and 673 K shows that thermal expansion decreases with temperature, possibly in relation with a structural rearrangement within the cubic structure during degassing. Thermogravimetric analysis shows that degassing of the guest gases begins at 450 K, and occurs at a higher rate above 750 K, but it is not completed even at T = 1273 K. Melanophlogite confirms to be a good host carrier for the gases, with gas loss only at higher temperature. Moreover, as degassing occurs with almost no thermal expansion, it could open promising application for its mechanical stability during degassing.

Posted on 6 May 2019 by Daniele Pontiroli

We report on the preparation of a novel hierarchically-porous super-activated carbon originating from organic waste with specific surface area exceeding 3000 m2/g, obtained starting from biochar derived by the pyrolysis of poultry litter. The chemical activation process proved to be efficient to remove the majority of impurities other than carbon, stabilizing a highly porous hierarchical structure with local graphene-like morphology. The presence of P and S with concentration below 0.1 wt% distinguishes this activated carbon from the usual ones obtained from vegetal sources. Thanks to these features, the obtained porous compound demonstrated to behave as an excellent electrode material for high-performance symmetric supercapacitors, reaching high specific capacitance up to 229 (13) F/g. Remarkably, the devices also supply high current density of 10 A/g without using any conducting additives and display high power density and reliability. Moreover, these optimal performances have been obtained operating by using simple eco-friendly electrolytes, like KOH and Na2SO4 aqueous solutions. The availability, the biocompatibility and the inexpensiveness of the starting materials, together with the low environmental impact of the electrolyte, suggest possible large-scale applications for such devices, for example in the field of transportation or in renewable energy-grids, but also in the field of bio-medicine.

Optical excitation at terahertz frequencies has emerged as an effective means to dynamically manipulate complex materials. In the molecular solid K3C60, short mid-infrared pulses transform the high-temperature metal into a non-equilibrium state with the optical properties of a superconductor. Here we tune this effect with hydrostatic pressure and find that the superconducting-like features gradually disappear at around 0.3 GPa. Reduction with pressure underscores the similarity with the equilibrium superconducting phase of K3C60, in which a larger electronic bandwidth induced by pressure is also detrimental for pairing. Crucially, our observation excludes alternative interpretations based on a high-mobility metallic phase. The pressure dependence also suggests that transient, incipient superconductivity occurs far above the 150 K hypothesized previously, and rather extends all the way to room temperature.

Electrochemical intercalation of fullerene and hydrofullerene with sodium

Posted on 27 December 2017 by Daniele Pontiroli 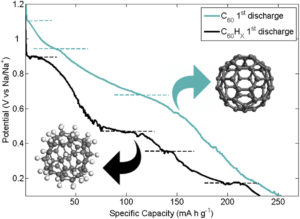 We report on the ability of fullerene C60 and hydrogenated fullerene C60Hx (x∼39) to operate as negative electrodes in novel Na-ion batteries. Building upon the known solubility of C60 in common organic electrolytes used in batteries, we developed a suitably optimized solid-state Na-(polyethylene oxide) electrolyte for this application. Electrochemical and structural properties of the fullerene electrodes were investigated through cyclic voltammetry, fixed-current charge/discharge of the electrodes, impedance spectroscopy and powder X-ray diffraction. Both C60 and hydrogenated C60 have been electrochemically intercalated with sodium. Specific capacities after the first cycle are 250 mAh g−1 and 230 mAh g−1 for C60 and C60Hx respectively. However, C60 electrode shows a strong irreversible character after the first discharge, probably due to the formation of stable polymeric NaxC60 phases, where Na+ ions diffusion is hindered. On the contrary, C60Hx displays better reversibility, suggesting that hydrogenation of the buckyball could be effective to preserve sufficiently large interstitial pathways for Na+ diffusion upon intercalation.

Posted on 8 August 2017 by Daniele Pontiroli 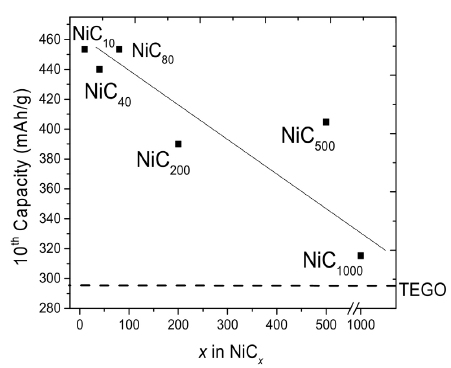 Modification of graphene has been undertaken in many research contexts in order to improve its properties. In this study, we examine Ni-nanoparticles decoration on graphene and its effect on sodiumion battery performance. A definite trend is observed on the relationship between Ni-nanoparticles concentration (and hence size) and battery performance. Comparable capacities on the order of 420 mAhg1 after 20 cycles at 100 mAg1 is observed for the 3 relatively high Ni-concentration samples NiC10, NiC40, and NiC80. As the Ni:C ratio decreases, a decreasing trend is observed in the measured capacity, with NiC200, NiC500, and NiC1000 producing capacities of 350 mAhg1, 380 mAhg1, and 300 mAhg1 respectively after 20 cycles at the same rate. Ex situ energy dispersive X-ray spectroscopy, scanning, and transmission electron microscopy shows the morphology of the Ni-nanoparticles decorated graphene and assists in quantifing their sodium content, emphasizing the increasing sodium content with increasing Ni-nanoparticles concentration. This systematic study details how Ninanoparticles concentration on graphene surfaces can be manipulated to enhance electrochemical performance, and that higher concentrations up to NiC10 favour better performance. For a compromise between performance and cost (Ni cost), the best composition is NiC500 which favors best performance with the least Ni decoration.

Posted on 7 August 2017 by Daniele Pontiroli

Single-walled carbon nanotubes (SWCNTs) possessing a confined inner space protected by chemically resistant shells are promising for delivery, storage, and desorption of various compounds, as well as carrying out specific reactions. Here, we show that SWCNTs interact with molten mercury dichloride (HgCl2) and guide its transformation into dimercury dichloride (Hg2Cl2) in the cavity. The chemical state of host SWCNTs remains almost unchanged except for a small p-doping from the guest Hg2Cl2 nanocrystals. The density functional theory calculations reveal that the encapsulated HgCl2 molecules become negatively charged and start interacting via chlorine bridges when local concentration increases. This reduces the bonding strength in HgCl2, which facilitates removal of chlorine, finally leading to formation of Hg2Cl2 species. The present work demonstrates that SWCNTs not only serve as a template for growing nanocrystals but also behave as an electron-transfer catalyst in the spatially confined redox reaction by donation of electron density for temporary use by the guests.

Mott Transition in the A15 Phase of Cs3C60: Absence of a Pseudogap and Charge Order

Posted on 9 June 2017 by Daniele Pontiroli 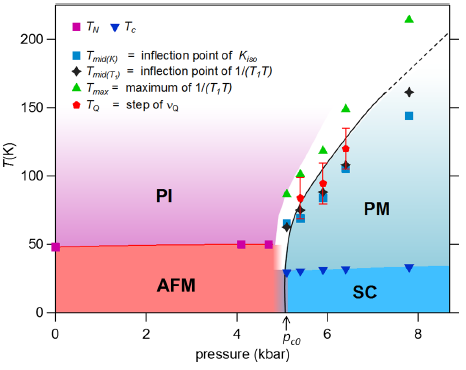 We present a detailed NMR study of the insulator-to-metal transition induced by an applied pressure p in the A15 phase of Cs3C60. We evidence that the insulating antiferromagnetic (AFM) and superconducting (SC) phases coexist only in a narrow p range. At fixed p, in the metallic state above the SC transition Tc, the 133Cs and 13C NMR spin-lattice relaxation data are seemingly governed by a pseudogaplike feature. We prove that this feature, also seen in the 133Cs NMR shift data, is rather a signature of the Mott transition which broadens and smears out progressively for increasing (p, T). The analysis of the variation of the quadrupole splitting νQ of the 133Cs NMR spectrum precludes any cell symmetry change at the Mott transition and only monitors a weak variation of the lattice parameter. These results open an opportunity to consider theoretically the Mott transition in a multiorbital three-dimensional system well beyond its critical point.